Wisma Geylang Serai is Singapore's first ever cultural heritage integrated hub that celebrates the heritage of Geylang Serai communities and encourages social interactions and community bonding among people of all ages and races.

It is not often that a cultural organization like Wisma Geylang Serai would seek out TikTok, but the Singaporean community hub was looking to expand its outreach to reach a younger market while remaining aligned with its family-oriented audience. Supported by a tight-knit, yet wide-reaching community of diverse users that is both family-friendly and varied in its age group, TikTok was the perfect solution.

Wisma Geylang Serai's idea centered around celebrating the Ramadan month by bringing as many families of all races in Singapore closer together. To keep the spirit of Ramadan and Hari Raya alive, Wisma Geylang Serai launched an appropriate Branded Hashtag Challenge that would have participants and their families together learning traditional Malay Dikir Barat dance steps and clapping to Dikir Barat music.

Through its #TepukSepuluh Hashtag Challenge campaign, Wisma Geylang Serai sought to maximize awareness and brand engagement within Singapore, regardless of background. And to kick start its campaign, the organization used TikTok's Brand Takeover - a promotional package designed to immediately drive eyeballs and participation to the Hashtag Challenge.

The challenge might be simple, but it was an opportunity for anyone to get a taste of Malay culture. Through several select influencers, #TepukSepuluh kicked off by challenging participants to learn and replicate a traditional Dikir Barat dance move using a popular traditional song. To drive awareness at the onset of the challenge, #TepukSepuluh was promoted within TikTok as a trending hashtag, advertised through the banner carousel on the Discover page and had its branded Malay music featured within TikTok's Pick a Sound page.

But to add a dash of flair to the videos, the #TepukSepuluh challenge included Wisma Geylang Serai Branded Effect placements - animated icons that could be added to videos. Branded effect placements are an additional brand touch point, as these branded elements come with their own dedicated landing page, and even show up as a clickable prompt within the videos that use the icon.

The campaign was a hit. As a cultural campaign, #TepukSepuluh resonated with TikTok users in Singapore, to the degree that participants replicated not just the influencer's dance moves, but also replicated the use of Branded Effect placements to a "T." To add a cherry on top of the campaign's success, the original campaign window was unexpectedly extended when influencers and even non-Malay users later became organic participants in the challenge. 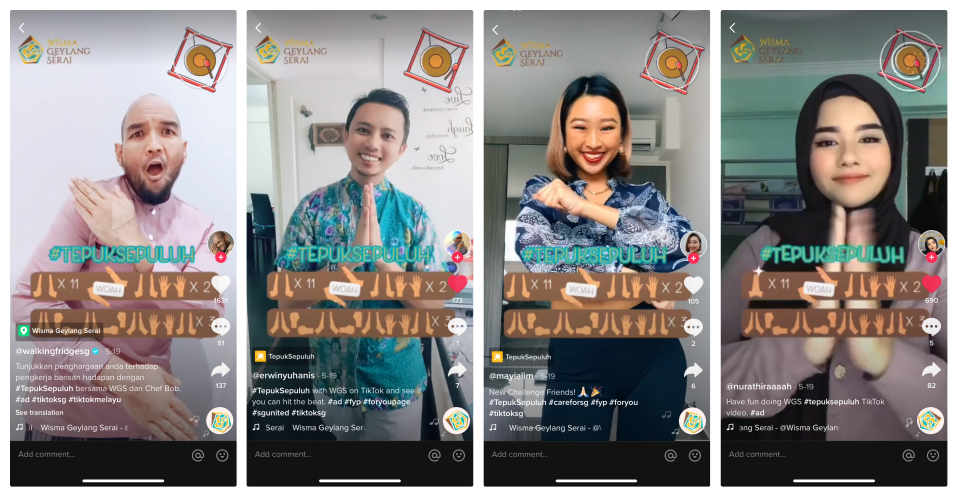 To ensure the freshness of the Brand Takeover-led #TepukSepuluh campaign, two different visuals were used and both were consistent with the rest of the campaign's theme, which ended up extending the premium experience beyond opening the app. In total, the campaign received 5.1 million impressions during its entirety and exceeded benchmarks. More importantly, it reached and garnered participation from not just Malay, but also non-Malay TikTok users as well.

A one-of-a-kind engagement format that taps into user passion for creation and expression.